Hadn’t planned to go much beyond the Erawan Shrine that morning in Bangkok, but It was small and the time was early, so on a whim I decided to go see the Golden Palace, which I knew was beside the Reclining Buddha. Perhaps I would have time to visit both recommended sights. Well, they say one of the “must do” things in Bangkok is a motorbike taxi ride.  I hailed one from Erawan Shrine.  Negotiated a price, insisted on a helmet and climbed on. (Best from the left side as the right has the hot exhaust pipe).  I had read to get on and hang on.  What accurate advise!  He was in a hurry, weaving in and out of traffic like he was in a Daytona Race!   As somebody who last week was hit by a motorbike with a sidecar as a pedestrian, I actually felt rather nervous.  Normally I love the speed and zippiness of a motorbike. I feel free and adventurous on a bike….  It’s the epitome of how I like to live every day, feeling alive, adventurous and beautiful!     But, this ride left me feeling freaked out and rather nauseated!   I definitely white knuckled the handle behind my butt.
Anyway, I made it in one piece and refrained from kissing solid ground upon arrival at the Golden Palace.   I entered the gate and was immediately overwhelmed.  There were as many tourists as at a final game of the World Cup soccer.  Signs everywhere warned of pickpockets and scammers trying to sell tickets. I was told by a police officer my long shorts were insufficient in length but there was a small building that offered skirts free of charge.  I would have to then go inside and around the corner to pay the 500THB entrance fee. I waited in the queue and felt like a child in a mosh pit. I’m pretty short and after five minutes that felt like three hours in the midst of a sea of tourists smelling like B.O.  and mildew.  I abandoned that idea and decided to walk around the grounds to see if I could get a view of the palace without the crowds.

Not much luck but ended up at the grounds of the reclining Buddha, which had crowds the size of those soccer games my brother played in when he was ten years old.   And I was told my long shorts were just fine for the location.  Paid my 100THB and headed in to find the reclining Buddha.

The grounds are expansive with statues of dancing Thai figures, fierce looking guards and towering pagodas.

Glimpsed the Buddha from a window into a massively long building.  So much bigger than I imagined.  I estimate I am probably the size of Buddhas ear!  To enter the building, take your shoes off and put them in a bag provides and carry them with you. Again, more pickpocket signs.

For some reason, I have it in my head Buddha is a female.  So, if I slip up and refer to Buddha as she, forgive me.

It’s a dark building with lots of red adornments as the building has walls of beautifully painted murals and the ceiling is beautiful. 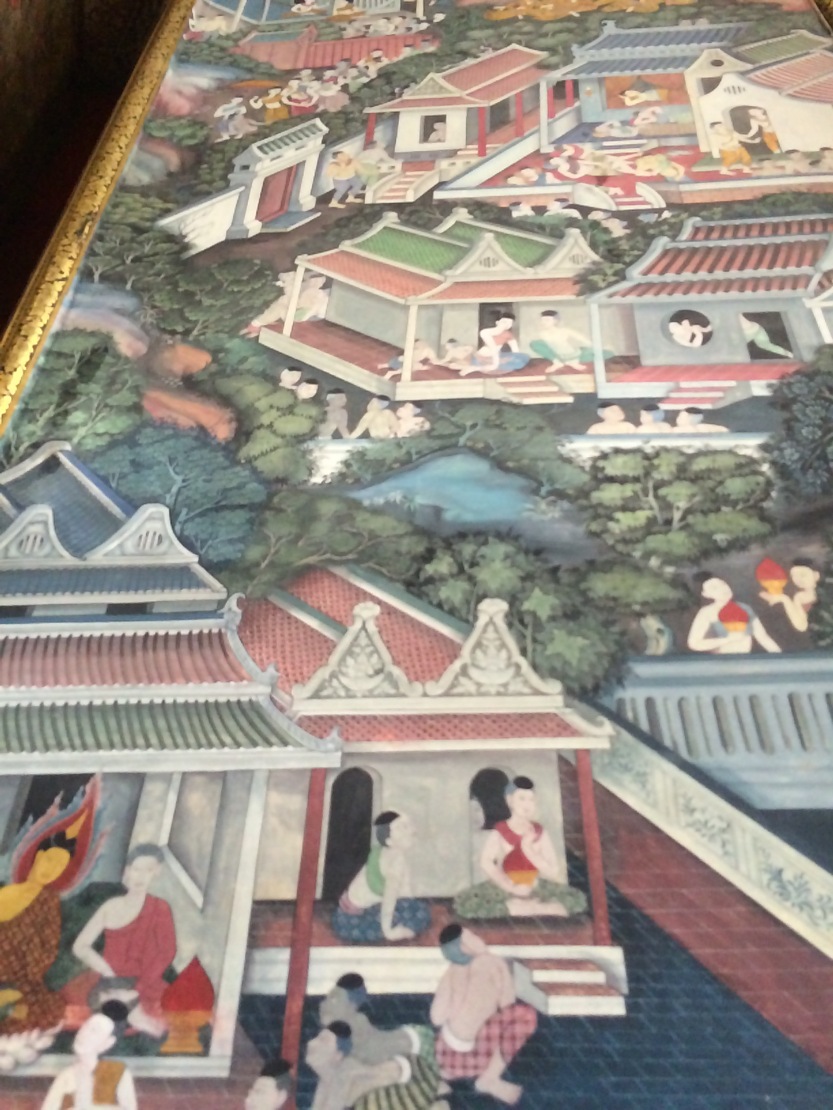 She is impressive and well renowned through Thailand.  Lying down, but supporting her he’d, she is indeed an impressive sight. She was built by King Rama I sometime in the 16th Century. This Buddha is said to represent Buddha entering nirvana. She is an impressive 46 metres long and golden!   The temple grounds are large and worth a wander through. You can pay for a guide to explain things to you.
Reclining Buddha is a site I am so pleased I got to see.  Impressive and the ambience on the grounds is one of calm and peacefulness.