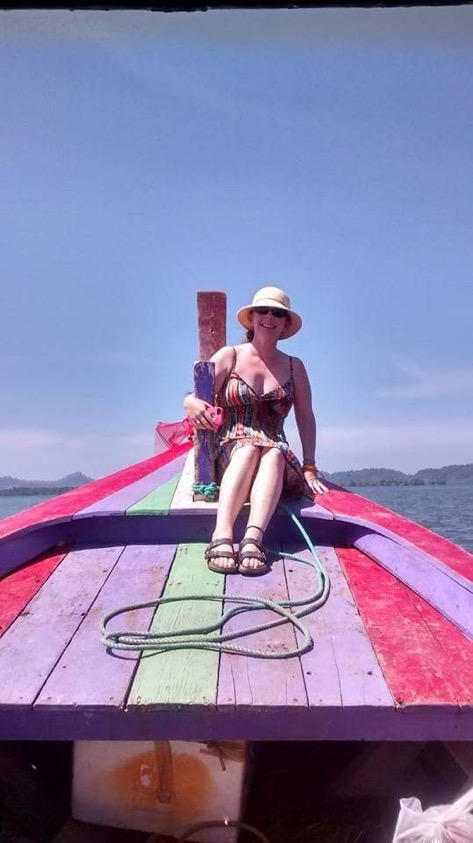 I first experienced typhoons in Hokkaido ten years ago. One fall In particular I remember them as a friend was visiting from Canada and it was windy as we drive to the airport, but no more than a southeaster back home!   However, at the airport they said it was a typhoon and all flights out were cancelled.  Her flight was rebooked for a week and so her stay was extended!  Yay for us!   The next week as we drive to the airport there was another wind storm and we figured it might be cancelled again when we saw a piece of corrugated sheet metal from a roof fly by!   And…. Delayed again due to typhoons.  So we had an extra two weeks of visiting which was awesome.  I was left with the impression that typhoons were just windy rain storm.

Typhoon  Nangka (Malaysian name for jackfruit) hit Japan Thursday evening, July 16th, 2015!   I am blessed to be in an area that was minimally affected. In other areas, major flooding and evacuation occurred. Here in Takatsuki. Up on a hill in an area called Hiyoshidai, I was very secure and dry in the home though there was a bit of concern with town alerts. Anyways, For two days prior, it was windy and during the day on Thursday, the clouds looked very interesting!  They looked like a picture – straight on the bottom and fluffy rounded bumps on top and sides. Picture perfect clouds. 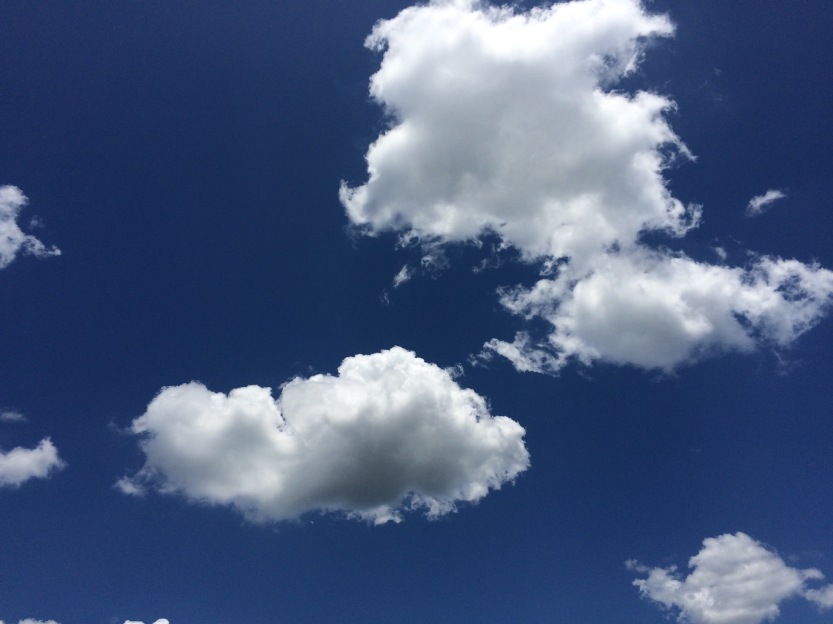 About four o’clock there was a massive downpour which lasted about ten minutes.  Later that evening, the wind picked up and the town siren rang out.  Shin and Katie suggested I close the metal shutters outside the windows so I did for pretty much the whole house.  In the past, I had assumed the shutters were for light but you know what assume means!  (Ass out of u and me!).  Closing the shutters made the house eerily pitch black.  It was just windy so I took the ewok, Emma, on a walk.  We didn’t go far as there are many electrical wires above the streets and some of the pole mounted mini power stations were making a strange sporadic sound. 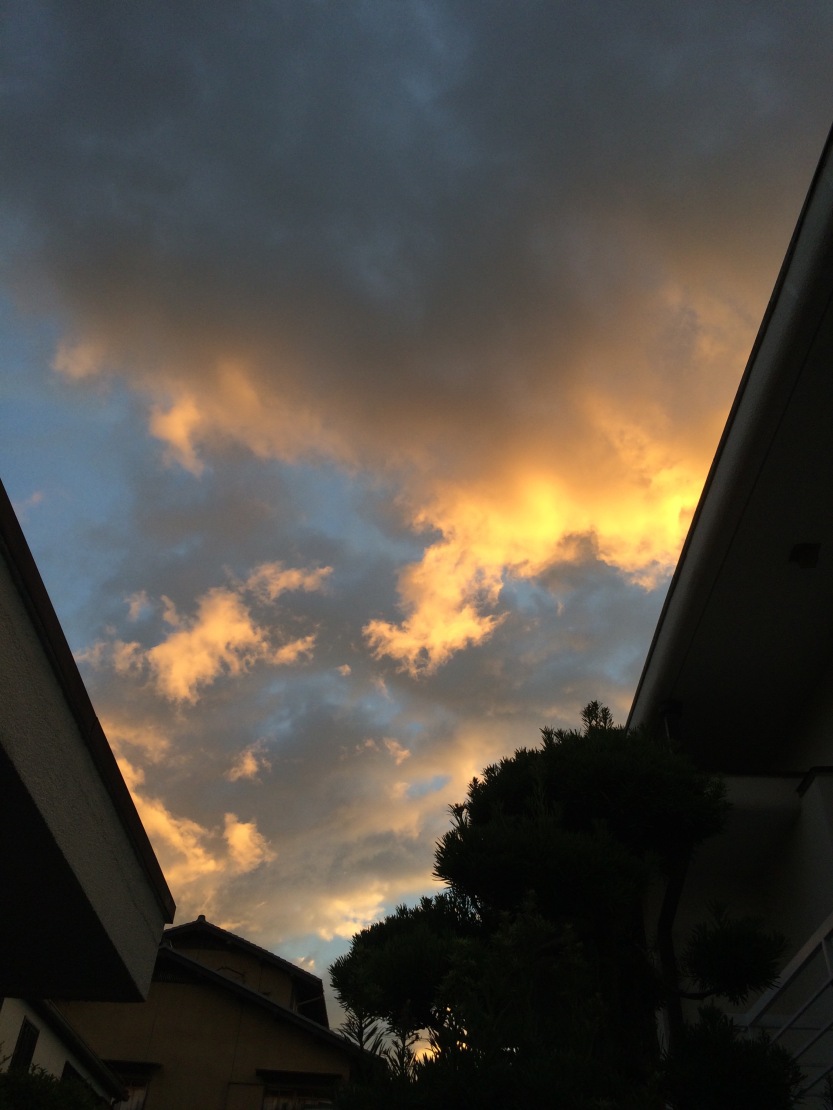 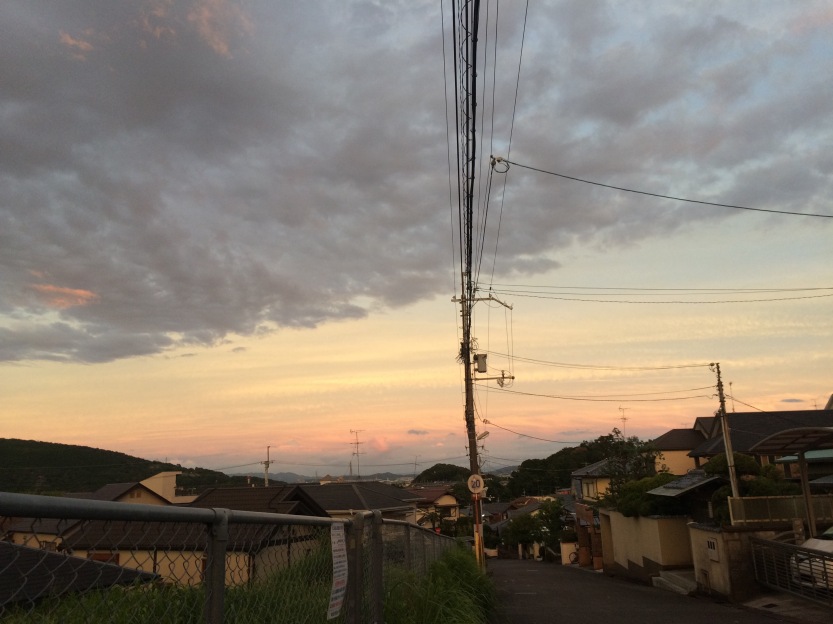 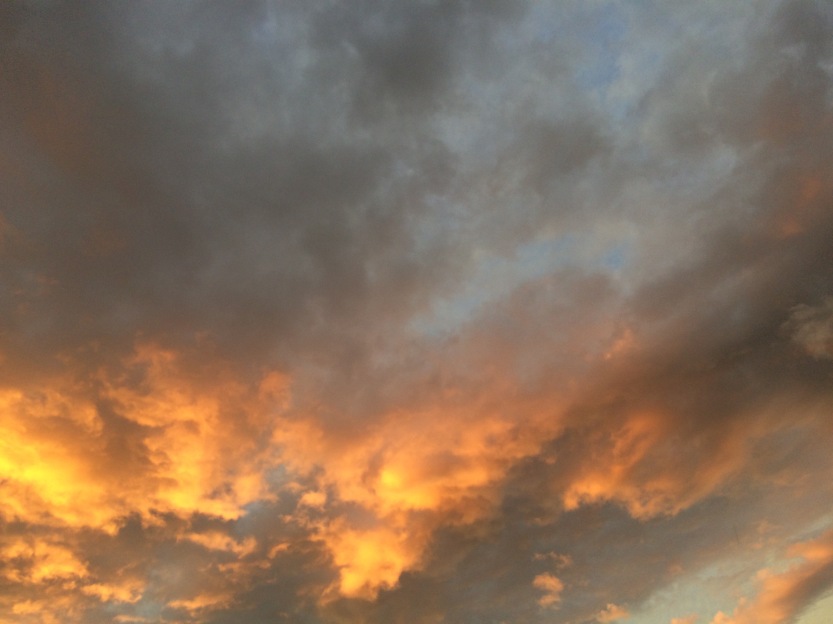 Woke up the next morning and it seemed as if the wind hadn’t hit at all! Everything looked as normal and I opened the shutters. It rained all day. I went to the mailbox and got drenched.  (Just down two steps and about a car length and a half away).  The temperature was still warm though so I sure didn’t mind a second shower!

Later Friday afternoon, the town siren went off and my phone made an unusual ringing that was shocking and rather loud. It was an emergency warning which I couldn’t read.  Shin and Katie, after receiving a photo of the message assured me it was for mudslides in neighbouring areas. 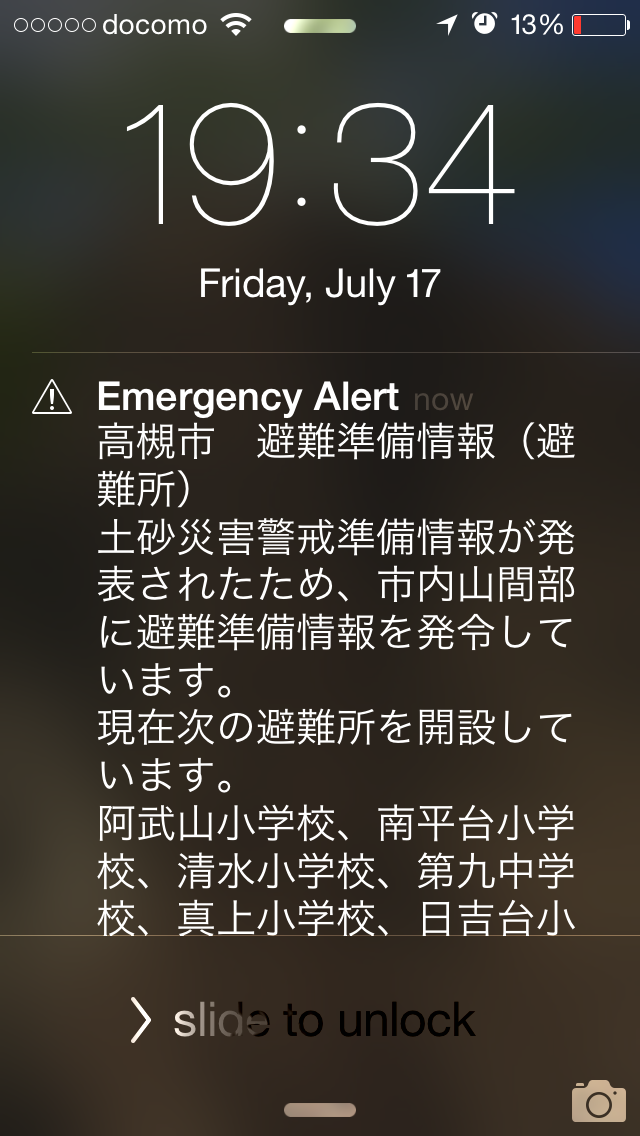 I think about four or so more emergency alerts came to my phone Friday evening up until 10:20pm!   And again Saturday morning at 7am, though there  was not a drop of rain falling and no wind.  The cicadas were out in full force chirping again!  But all was good. 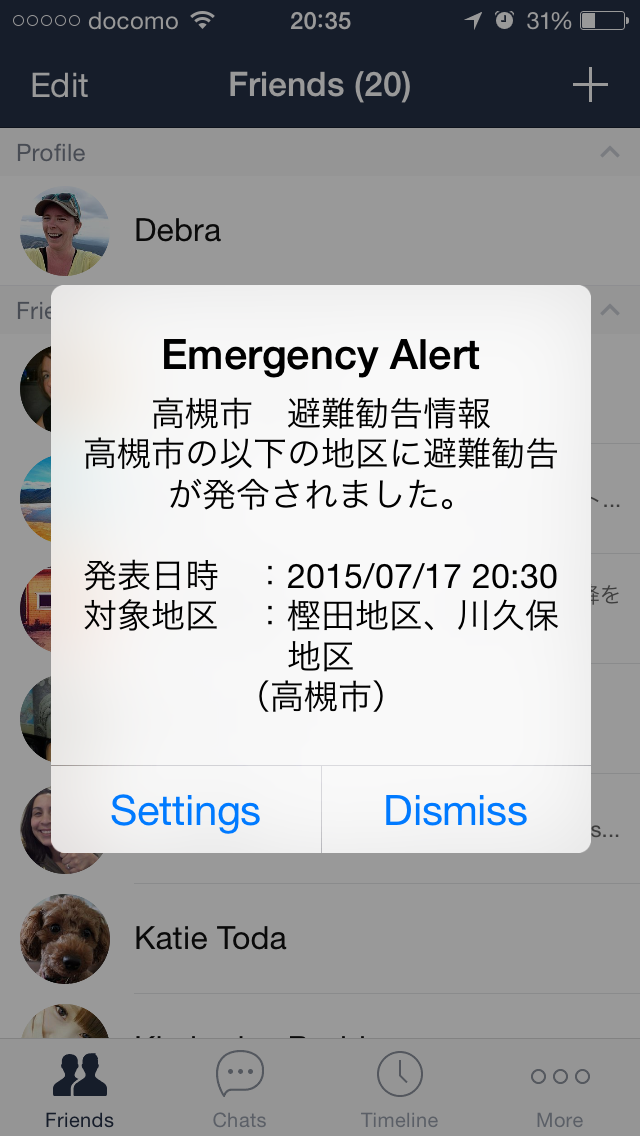 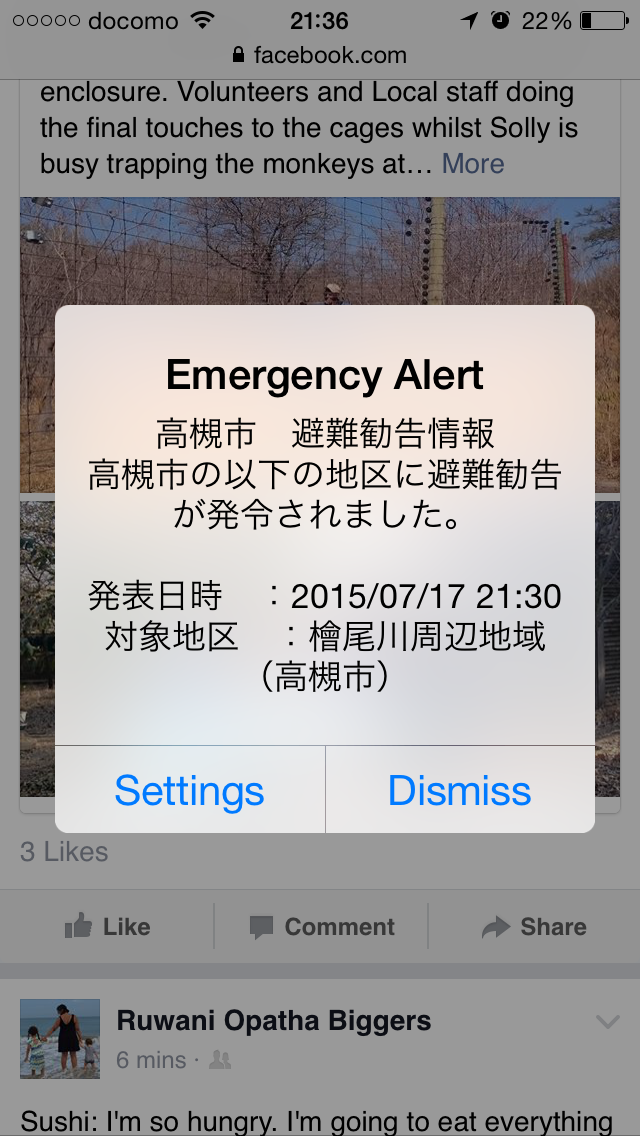 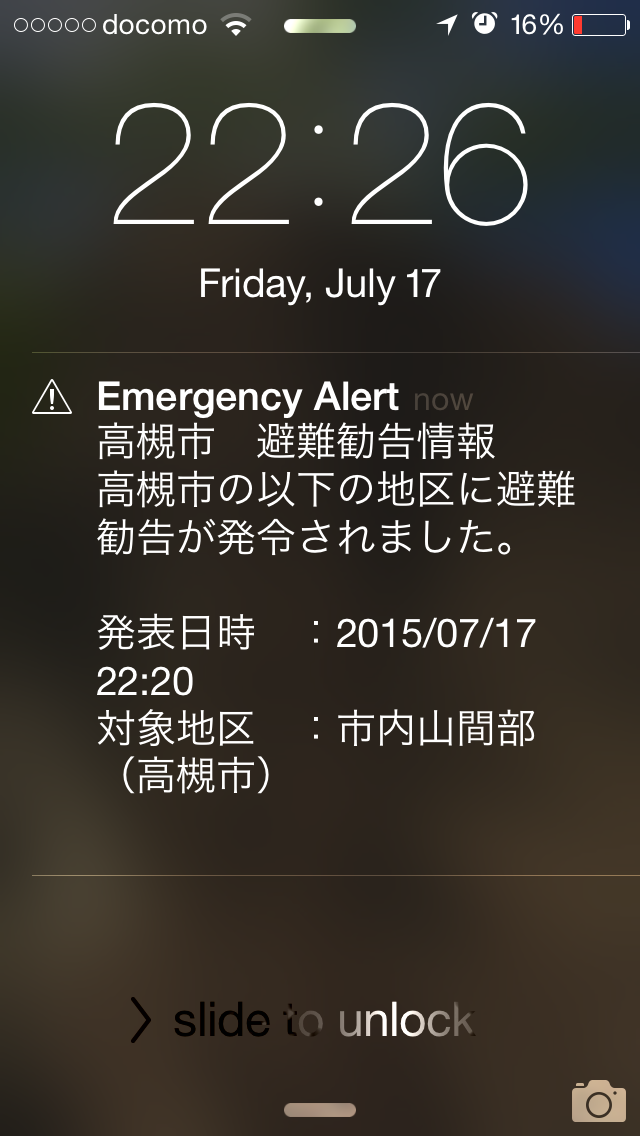 I was going to Kagoshima by plane Saturday morning so asked on a Facebook group of the JR train lines were running.  Apparently not but there is an airport bus from The nearby town of Ibaraki.  Just had to figure out how to get to Ibaraki.  Tried to call a taxi but the phone lines were all busy.  Shin came home and helped me out a lot with this.  He called and got through but was told it was a huge wait.  The bus was leaving at 11:40 from JR Ibaraki or 1:20 but I was pretty sure the 1:20 would be cutting it too short for a 3:35 flight.  I took the bus down to JR station.  The bus driver announced all JR trains were cancelled and he wasn’t sure about Hankyu.  There were many people waiting at the JR train station.  They had brought out chairs for people to sit on and wait.  I believe trains had stopped running Friday afternoon due to flooding and soft ground under the tracks.
My enquiry at the Takatsuki Tourist Info about whether or not Hankyu trains were running was met with uncertainty and apologies. Seemed so strange to me she wouldn’t know but I ventured on foot to the train.  About a five minute walk.  Up the stairs I could see a train arriving!  I was in luck.
However, I was to end up at the Hankyu Station in Ibaraki not JR.  Arrived at 11:39.  As luck would have it, the bus stops at the Hankyu station after JR so I was just in time to find the bus stop, but a ticket and make the 11:40 which left a little late from Hankyu’s train station!
It seems Japan overreacted a little to this typhoon from my perspective. School was cancelled but it was just raining, so many alerts, evacuation of homes in the mountains due to landslides, and cancelling trains.  But, better safe than sorry.  Two people did die in the typhoon, though I guess on Shikoku where it hit the hardest.  A 70 year old man fell into a swollen ditch of rushing water trying to secure his house was one death, I am uncertain of the other.

So….  Mostly all that’s well ends well!  With the exception of the bus being about twenty minutes late, all is good. Better than no bus or wrecked highways or cancelled flights!   Life is good!  I am hoping there isn’t a typhoon planned for the day I am meant to fly to Thailand!   Fingers crossed!!!   😱 🙏🏼 🚉✈️