Yay!!   I went to my first festival in Japan.  Summer is full of festivals, but I had missed any that had been celebrated until last night. I went to the first night of the Star Festival (Tanabata) in Tennoji in Osaka last night.


It was a nice night with only a little rain sprinkling.  The festival was held at a Shrine and the ambience was festival and beautiful.  Typical of Japanese  festivals, there were fun and cute games for the kids, tonnes of food stalls and it was crowded. Kimonos and yukatas (summer kimono) were plentiful and added to my enjoyment! 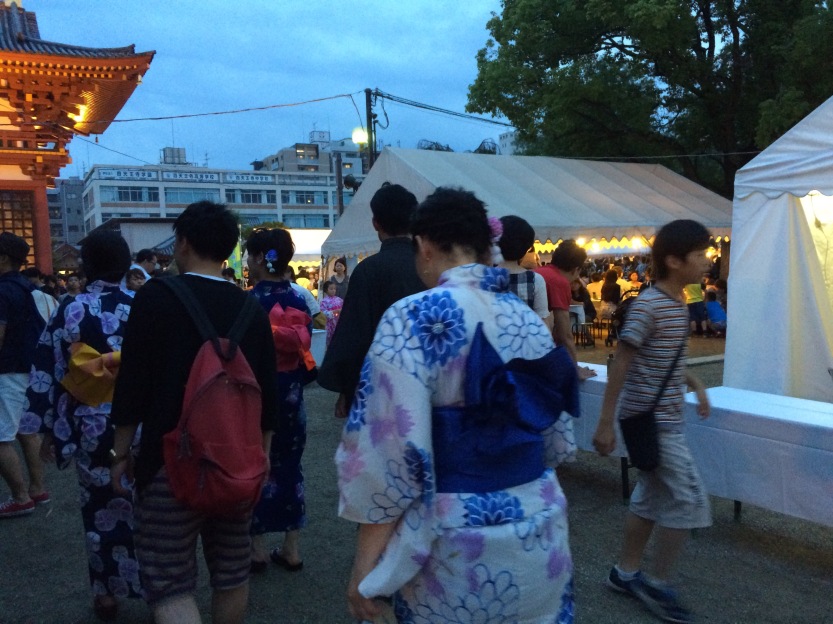 There was a tall bamboo archway with blue and white lights strung symmetrically above the bamboo.  The bamboo was adorned with stars, balloons, and beautiful coloured paper with the wishes people had written and tied on.  You could pay 100yen (about $1) to write your wish and attach it to the bamboo.  Before entering the bamboo there were water misting devices which at first I thought was a useful and thoughtful addition but it actually related to the legend behind this annual celebration on July 7th – the seventh day of the seventh month.  (Yes, it started at seven o’clock!). 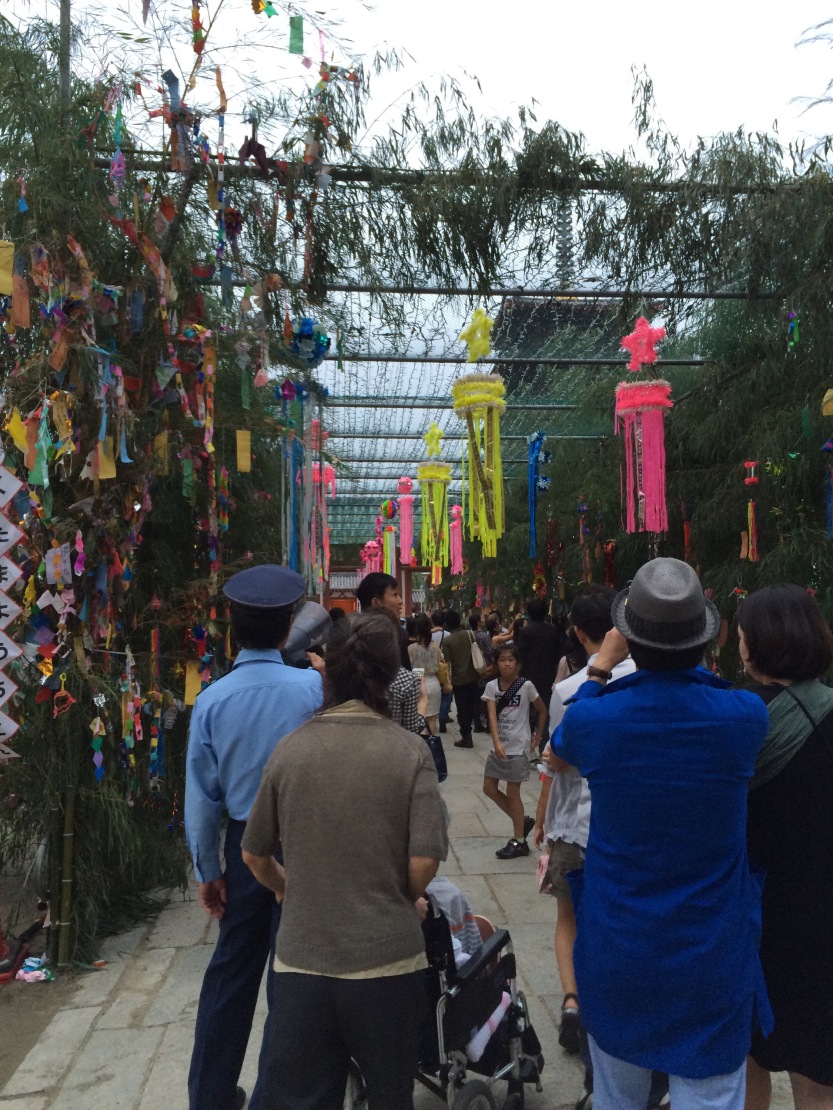 I wander around and enjoyed beef on a stick, avoiding the specialty tongue on a stick bbq’d, and scallops bbq’d on a stick.  Beer flowed and laughter filled the air. 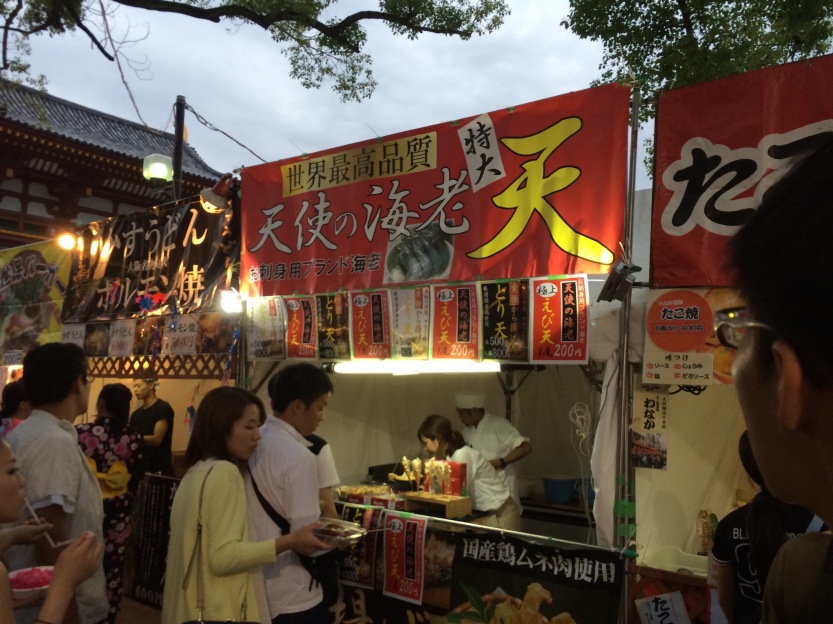 I soon discovered the story behind the festival and here is the Wikipedia version:

Orihime (織姫 Weaving Princess?), daughter of the Tentei (天帝 Sky King, or the universe itself?), wove beautiful clothes by the bank of the Amanogawa (天の川 Milky Way, lit. “heavenly river”?). Her father loved the cloth that she wove and so she worked very hard every day to weave it. However, Orihime was sad that because of her hard work she could never meet and fall in love with anyone. Concerned about his daughter, Tentei arranged for her to meet Hikoboshi (彦星 Cow Herder Star?) (also referred to as Kengyuu (牽牛?)) who lived and worked on the other side of the Amanogawa. When the two met, they fell instantly in love with each other and married shortly thereafter. However, once married, Orihime no longer would weave cloth for Tentei and Hikoboshi allowed his cows to stray all over Heaven. In anger, Tentei separated the two lovers across the Amanogawa and forbade them to meet. Orihime became despondent at the loss of her husband and asked her father to let them meet again. Tentei was moved by his daughter’s tears and allowed the two to meet on the 7th day of the 7th month if she worked hard and finished her weaving. The first time they tried to meet, however, they found that they could not cross the river because there was no bridge. Orihime cried so much that a flock of magpies came and promised to make a bridge with their wings so that she could cross the river. It is said that if it rains on Tanabata, the magpies cannot come and the two lovers must wait until another year to meet. –Wikipedia
It was a great start to the summer festival season!   Beautiful, fun, delicious, and meaningful. 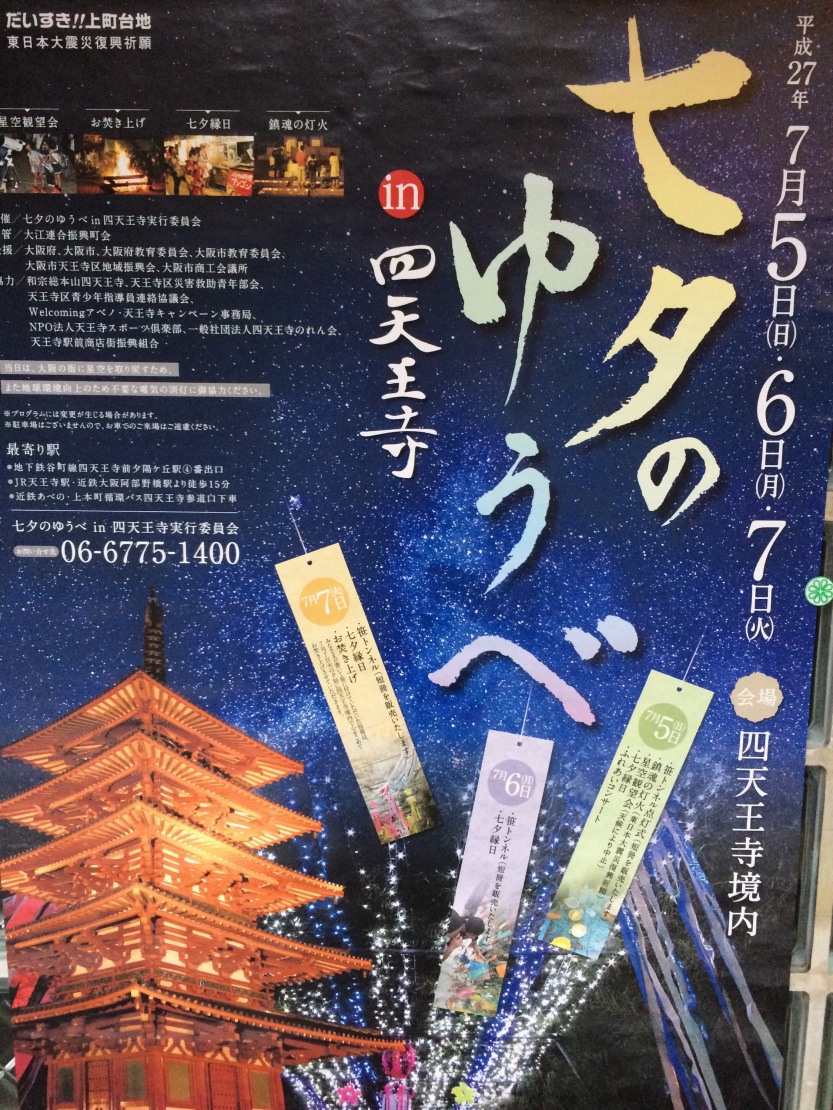 One thought on “Star Festival”