I took an adventure on Sunday to visit my Mexican friend in his town near Lake Biwa. Lake Biwa is the largest lake in Japan, and it certainly felt like being on the ocean more than a lake. Its in a different prefecture – the prefecture of Shiga, whereas I am in Osaka.

I took the train through Kyoto with a brief stop at the station – a view of this beautiful, old and yet modern city and its station was in contrast to the rural views to come. I was about ninety minutes early, so decided to stay on the train and keep going past BiwaKo (Lake Biwa) and see what I could see. I saw a lot of countryside, which is called inaka, and all there is to see – rice fields, mountains in the distance, the occasional town and more rice fields with mountains behind. I was fascinated by the several series of six to eight large solar panels I saw symmetrically lined together about every small town or five kilometer or so. The solar panels were basically beside/between rice paddies, so I`m not sure if they`re used for agriculture like the many irrigational canals, or for towns or individual farms. Either way, they were fascinating and made me curious. The time between stops was unpredictable – sometimes 2 minutes, sometimes 8 or ten minutes; I got to the town before the next major junction and realized if there was a good distance between that stop and the junction, I would be late – so I got off, crossed the platform and caught the next train. 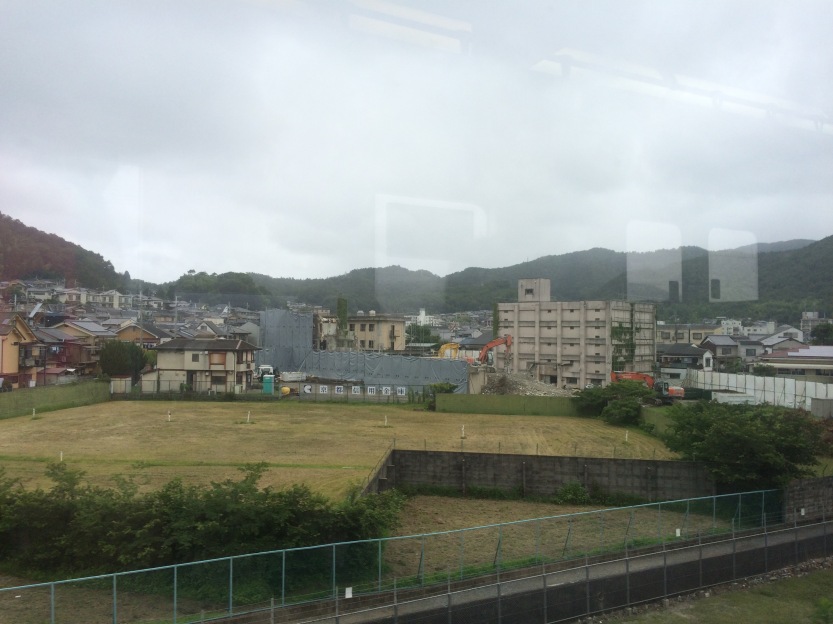 Upon arrival, I was greeted by a statue of Basho Matsuo who lived between 1644 and 1694. He lived in a remote tea hut and was the founder of a haiku club of poets. Haikus are Japanese poems that have a specific structure of 3 lines, with the first line having 5 syllables, the second line having 7 syllables and 5 syllables in the third and final line. The lake is on the old Tokaido Line – the travelling route between Kyoto and Tokyo. The railway generally follows this route.

The area is also famous because of the ancient female writer, Murasaki Shikibu who wrote many stories, including the famous story of Genji.

First, we had a little picnic of apricots and sushi – I had a white fish, not sure. It was from Nara, and lovely. Wrapped in a leaf, it was presented so beautifully and tasted amazing. We sat along the lake, and enjoyed the view of so many people fishing and canoeing in the lake. 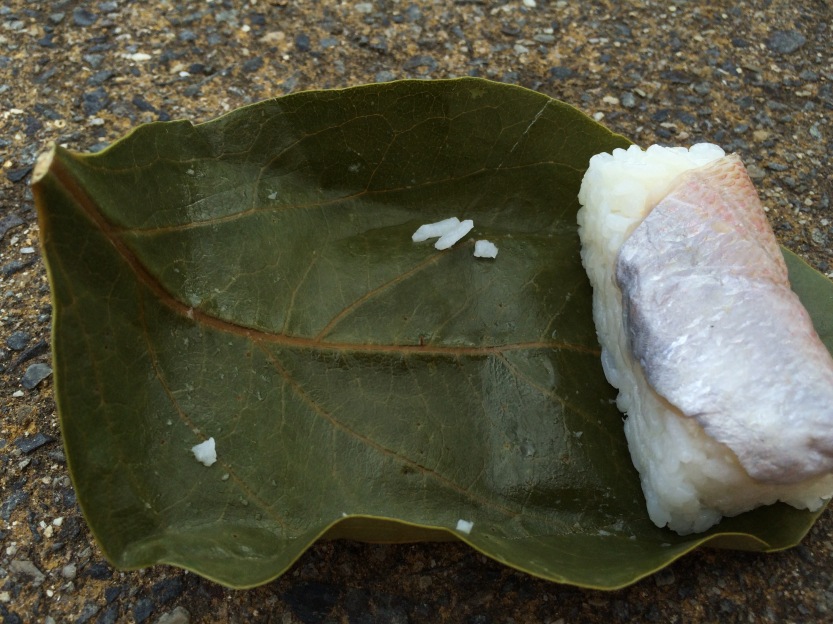 As we walked a bit further, the lake was on the left and an apartment on the right. There was a wall about three feet off the ground with a large bush on the top of the wall. I happened to glance towards the wall, did a double take and well… ran for cover. A huge snake was there. We could see a loop of the snake – about 3 feet long, the end of the snake – also about 3 feet long but not the exact tail as it was concealed by bushes on the ground, and no sign of a head. I have no idea how long the snake was, but being totally phobic, I freaked out to say the least. We could see only about 6 feet of it, and that was more than enough for me. It was a mustardy-brown colour and a dark brown or black. It wasn`t super thick – maybe the diameter of two Canadian hoses, but the length was a bit creepy. It didn’t move lightning speed but it certainly wasn`t slow for its size either. My heart racing, we walked fairly quickly along the lake after that.

(Didn’t stop to take a picture of the snake)

Took a boat ride around the lake – an hour relaxing on the top deck. A beautiful new-looking paddle wheel boat toured us around some of the lake. The loudspeaker announced many facts about Lake Biwa as the woman inside the boat below educated those that were native speakers. I just heared `BiwaKo` a lot and then the word song many times. And then she sang a lovely ballad. We passed under many bridges, each of which we as standing or sitting passengers were fairly close to. Most people tried to jump and touch the bridges – a few were reachable to the tall folks, but most were a bit too tall. It was a nice day for a boat ride and we saw the many little cities and towns, among them Otsu, the main Biwa Lake city, scattered around the lake. 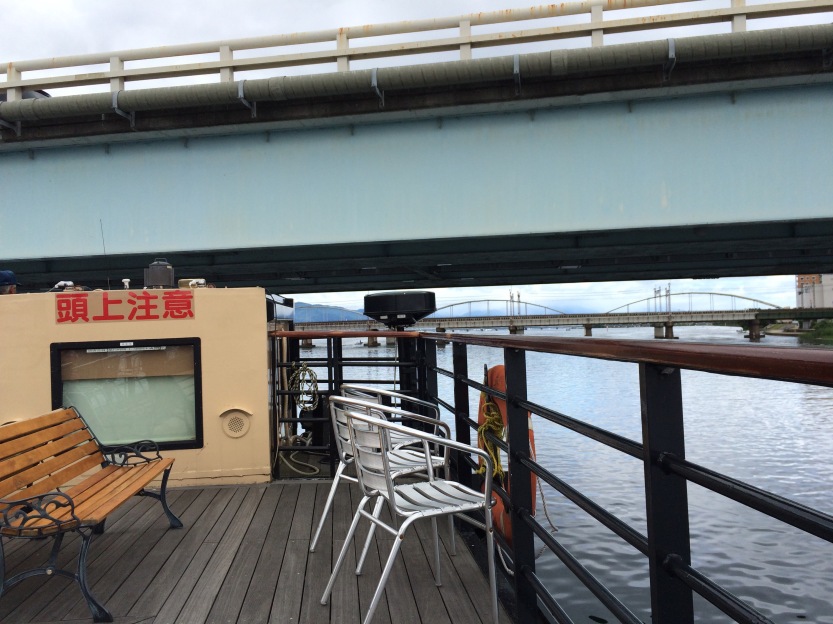 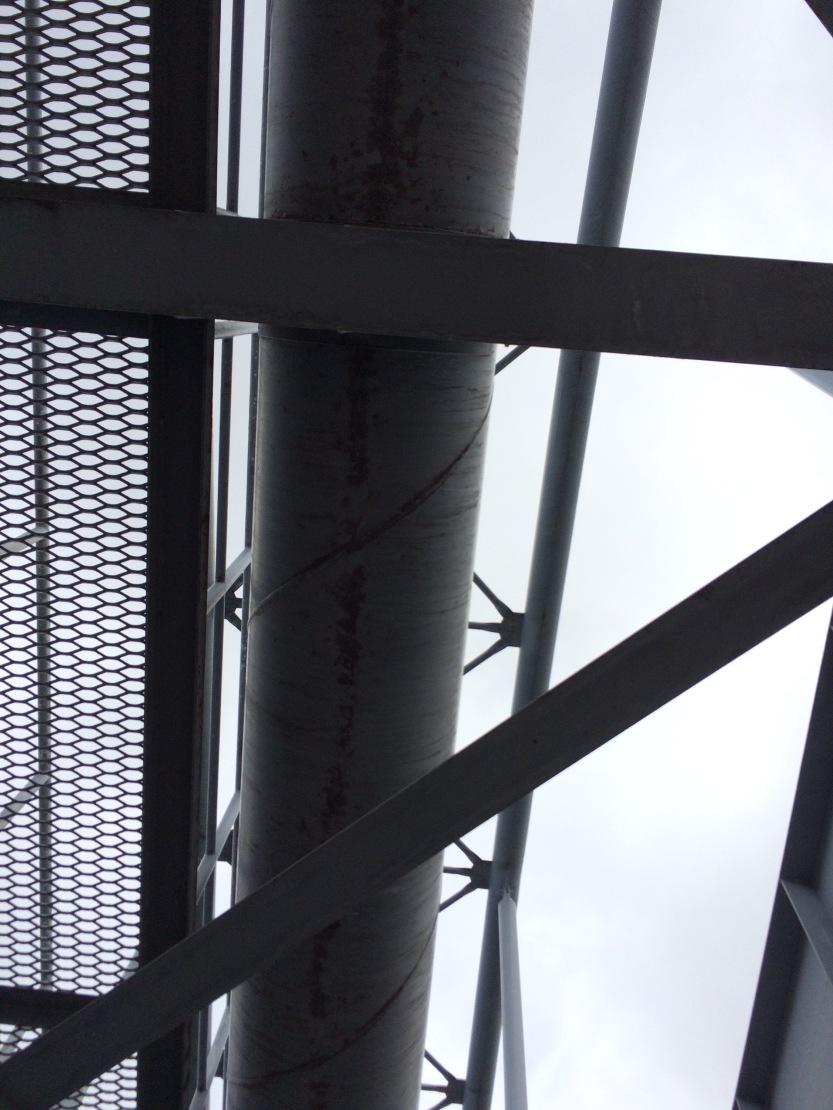 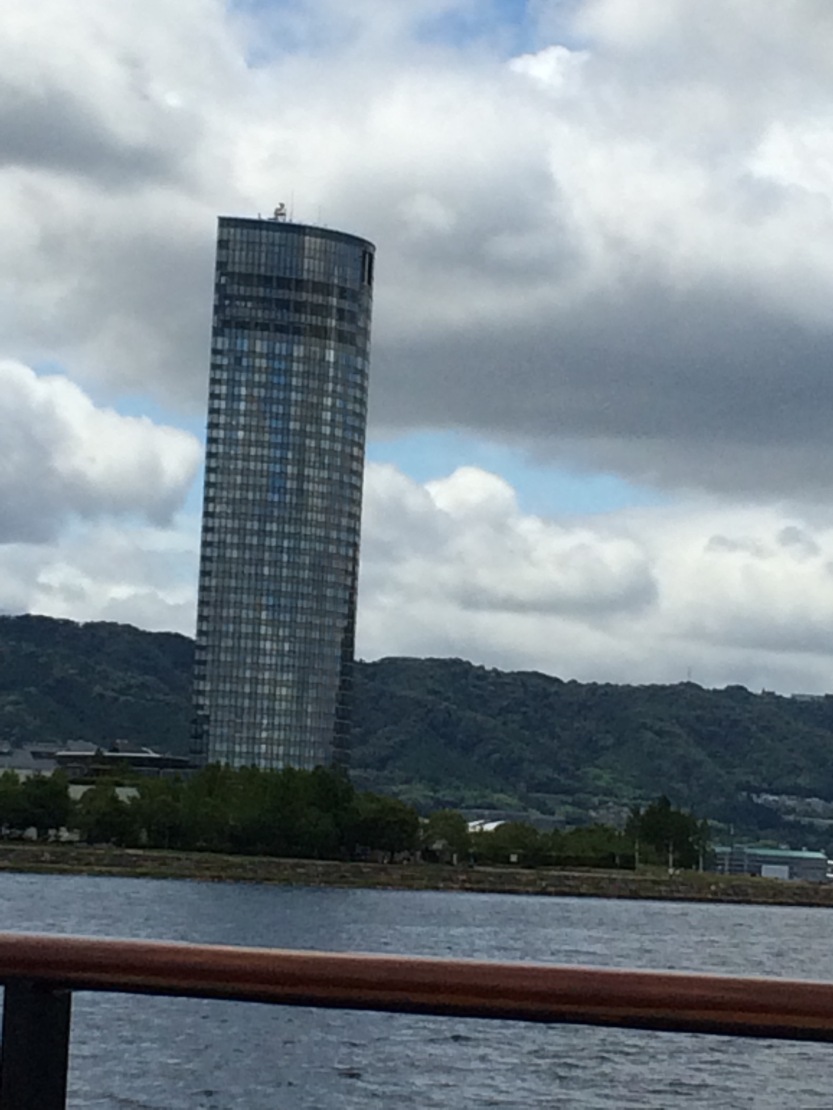 After the boat tour, we went to a temple. Ishiyama-dera is a temple that was founded in the 8th century, and is famous because its where Murasaki Shikibu create the plot of the Tale of Genji. The shrine was beautiful with plums ripe and falling off the tree, the sun came out and blessed us with a blue sky, and the smell was rich and beautiful. We were lucky enough to be able to visit a display showing several screens from Murasaki Shikibu stories, as we were there on the last day of the exhibit. It was beautiful and reminded me of many of the art work I had got when I did a homestay in Uji near Kyoto ten years ago. 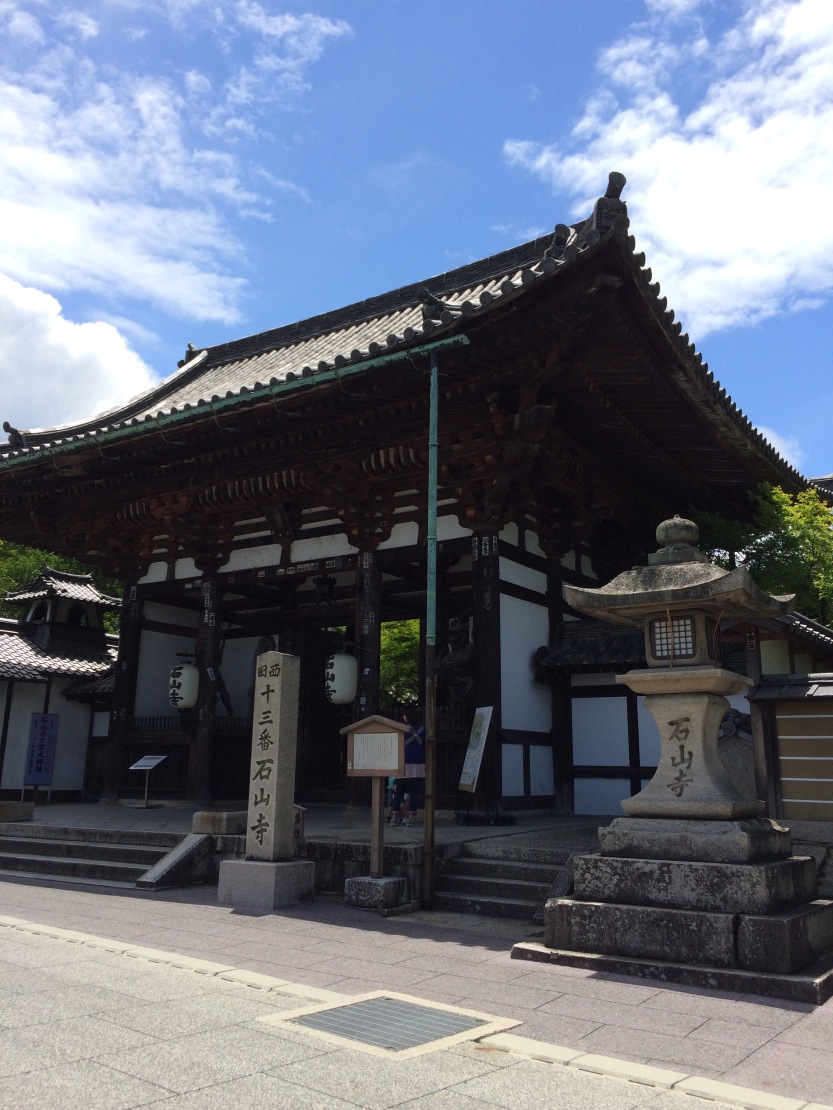 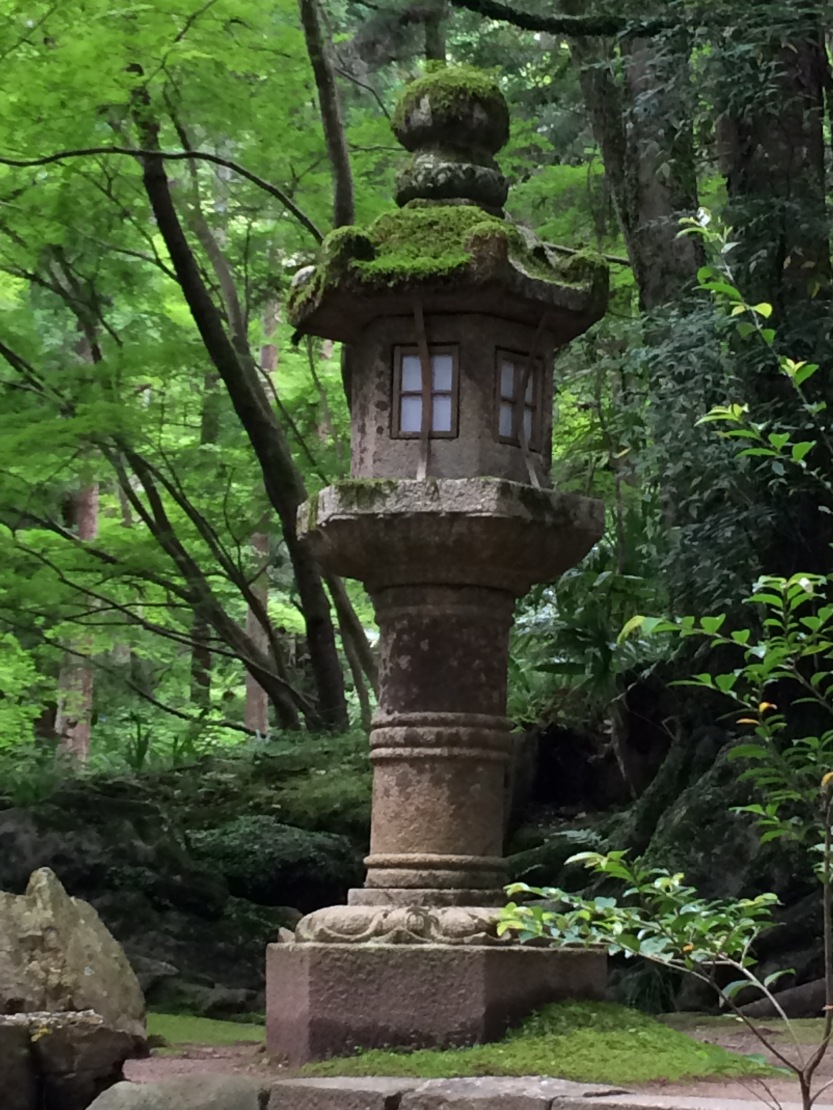 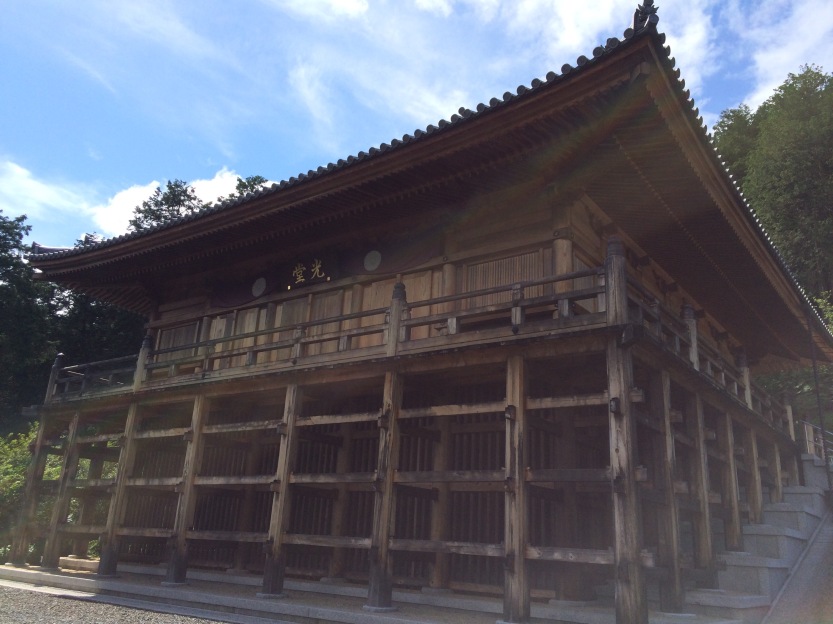 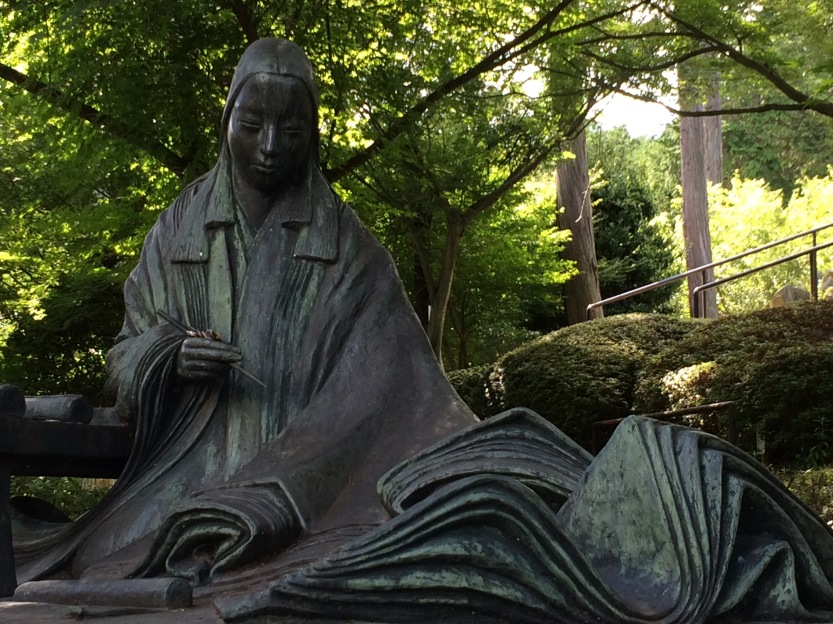 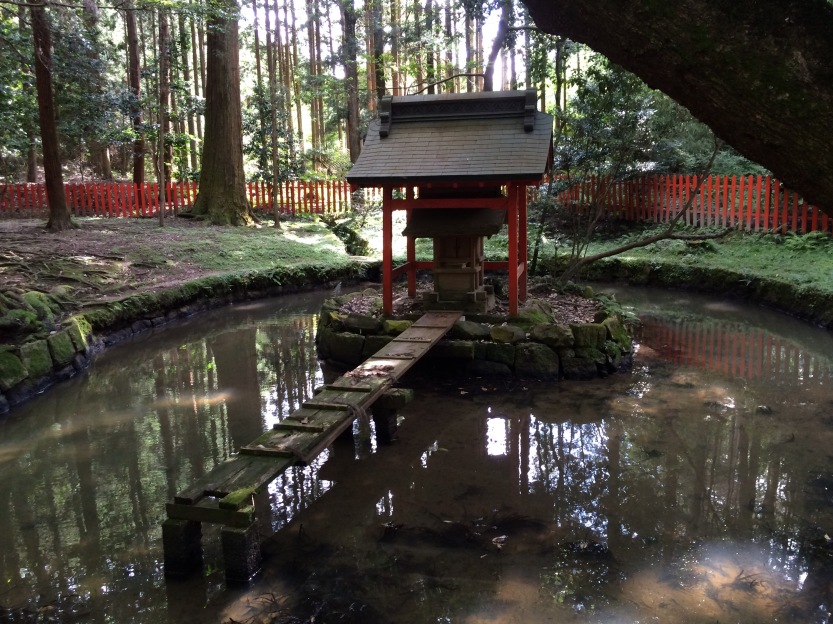 Our plan was then to walk to a mall and see a movie, then go for dinner. It was quite a long walk, with no snake sightings (Thank goodness!) but we saw a beautiful crane in the lake, and enjoyed our chat. We crossed one of the massive bridges we had gone under to get to the mall. The mall was overwhelming – beuatiufl, white, brand new and massive! I loved this funky cardboard town for kids at the bottom of one of the escalators. The movie theatre had a display of Studio Ghibli movie scenes which I loved. We were hoping to see a movie that neither of us could remember the title, so it was difficult to read if it was there using Japanese`s foreign word alphabet, Katakana. We asked the woman for the movie about the angry music teacher. She asked us to wait and came back with a book showing us Mad Max and Tomorrowland – we figured this meant the movie wasn`t playing anymore. We both had our heart set on what we used our cell phones to discover the name was `Whiplash` – so we decided to go for dinner instead. 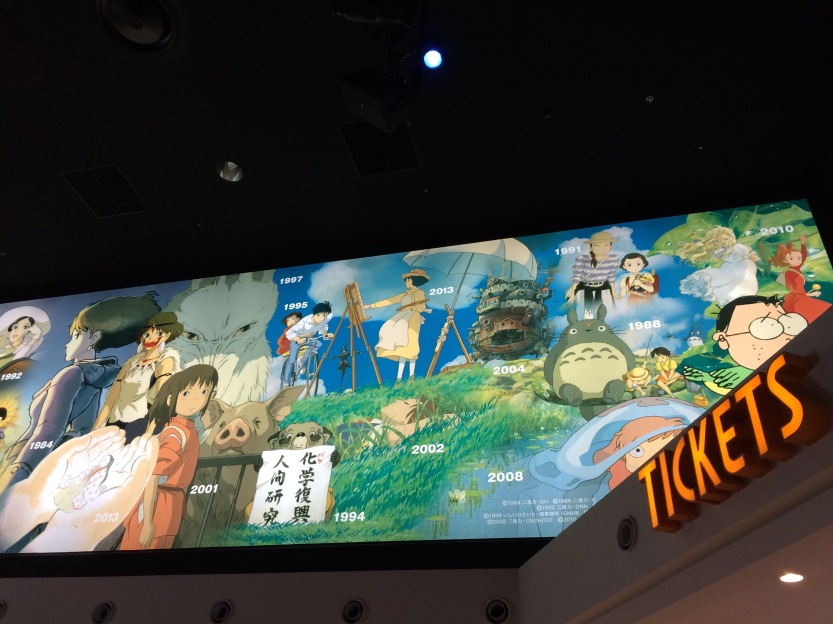 My friend said he had smelled both a grilled beef (yakiniku) restaurant and a pasta restaurant near his home that enticed him greatly but he hadn`t tried either of them out. Deciding on the pasta place, we hopped a few buses towards the restaurant and were greeted by a quaint, lovely round pasta and pizza joint – the smell was, indeed, intoxicating! The round building was made of wood with a large skylight in the middle of the domed ceiling. The tables were all thick wood, and there was a small fireplace in the middle of the room. It was a foodie`s heaven! We decided on a shared set and each had a drink – mine was apricot and peach tea, homemade, then a shared appetizer plate with salad, capacio, some pickled vegetables, a corn bread and some thinly sliced meat loaf. It was excellent. Our pizza was a chicken and rosemary pizza with lemon to squeeze on it. Plentiful, savoury cheese topped this delicious dish! Next we had pasta with grilled eggplant, marscapone cheese, basil and tomato. It was very good. (In fact I am currently roasting eggplant and tomatoes to attempt to replicate this for dinner tonight. Fantastic. We had a choice of the dessert counter, I had a raspberry crepe pie, and my Mexican friend had a fruit tart. Both were excellent! A lovely end to a great and sunny day exploring the Biwa Ko area… 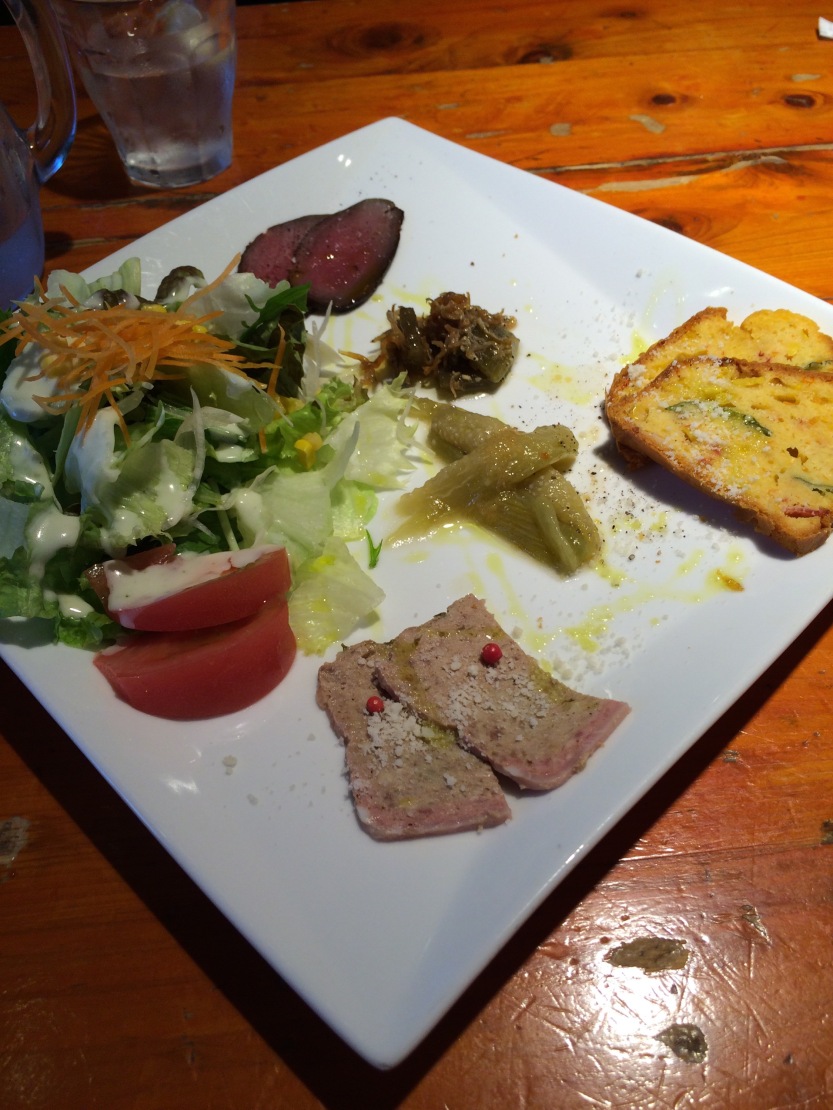